The only chicken served in my vegetarian household

Okay, that's not completely true. I've also made a chicken out of a cheese quesadilla. 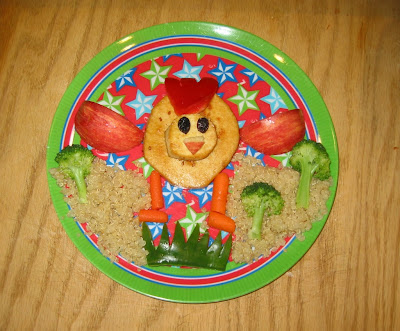 I cut tofu into a large circle for the body and a small circle for the head, and fried it in teriyaki sauce. For the rest of the chicken I have carrots legs, raisin eyes, apple wings and beak, and a red pepper comb. The ground is made of quinoa with green pepper for grass and steamed broccoli shrubs.

The husband and I also had teriyaki tofu with quinoa and steamed broccoli, but our dinners weren't nearly as cute.

This gives me an idea of what I'll be serving to SchmoopyBoy on Thanksgiving ;)
Posted by Shana at 7:00 AM No comments:

Here's a closing to an eventful Halloween season. For a 'date afternoon' with SchmoopyBoy, we went for a hayride. I like to call this picture "SchmoopyBoy and a couple of asses" because I'm a dork like that, although his head is conveniently hiding one of the asses. 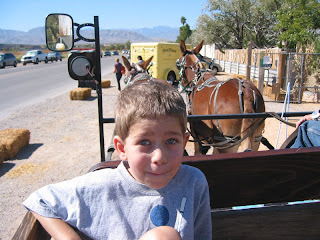 Of course the hayride would not be complete without a goofy overexposed self portrait, in which SchmoopyBoy makes one of his characteristic poses for the camera. 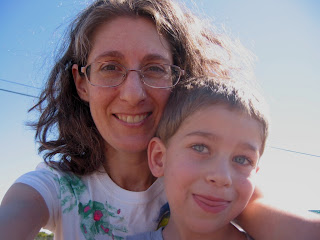 Later that week we carved a pumpkin. A cute happy pumpkin, not a scary one. 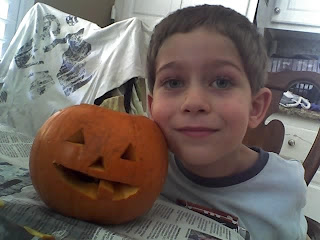 On Halloween night both kids got dressed up. Lil' Cowboy Schmoo kept me company while I handed out treats at home. Batman chose to see a movie over Trick or Treating, so the husband took him to see Hotel Transylvania. But, because we are super cool parents, he still came home to a bucket of treats. 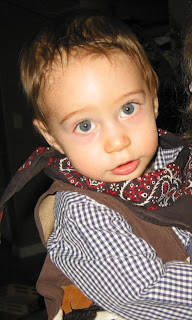 You Don't Own Me - a PSA from Leslie Gore.

What "Having It All" looks like in my life

In keeping with the theme of this month's Feminist Odyssey Carnival, today I am writing about what "Having It All" looks like in my life. I approach the concept of Having It All from my particular set of circumstances, which include the facts that (a) I work outside the home as the primary income earner in my family (I am not in a formal leadership position but am respected as a technical expert in my field), (b) I have a rather crunchy, AP-ish style of parenting, and (c) my husband and I do not have a local “village” of support. I would expect Having It All to look fairly different for a woman with different circumstances.

Given all that, this is what Having It All looks like in my life:
Most of the time, Having It All looks and feels pretty great. I am incredibly privileged and my life is full to bursting with laughter and love and pride and accomplishment. Sometimes it looks and feels like complete chaos, but I love that there is seldom a dull moment. That does not mean that it is not hard, or overwhelming or heartbreaking sometimes. This is also what Having It All looks like in my life:
Having it all does not mean having perfection (as if there were such a thing outside of fairy tales and click-bait mommy-war articles). There are always trade-offs and choices to be made. I make the choices that I think work best for my circumstances and my family, knowing fully well that other women might make different choices and would judge me for my choices.  And that is ok with me. Just as there is no single monolithic Woman, there is no single set of life choices that represent Every Woman's personal priorities.

And really, most of the time I am simply too busy, distracted, or exhausted to care.
Posted by Shana at 4:30 PM No comments:

"Do You Have It All?" is the Wrong Question

I have deliberately stayed away from the topic of Having It All during the past months. As you may be aware, there were a number of well publicized articles in the media discussing whether or not women could, or even should endeavor to “Have it All”. At the time there were so many smart, articulate women that wrote on the issue, many articulating my very thoughts on the matter, that I simply left the discussion to their capable hands. Nonetheless, the theme for this month’s Feminist Odyssey Carnival is “Having It All” so I’ve been thinking a bit about the topic lately. You might even see more than one post on the topic this month.

There is no exact formula for having it all that equates for every woman all the time, because there is no monolithic Woman. A woman should be skeptical of anyone who tells her that she must have A and B and C but not D or else she does not have it all and should feel disappointment with her life.

It was a full weekend here at chez Schoopy. I had a 3 day weekend for Columbus Day, which was nice. On Saturday I took the schmoos to a local fall festival. SchmoopyBoy was hoping to get his face painted like Batman, but was pretty happy with the spider theme. 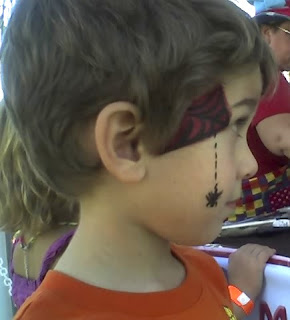 Bounce houses, a farmers market where we bought and snacked on the best, most sweet and delicious strawberries I've had all season, and a playground with a huge play train made for a great day. Of course I forgot the good camera at home, and Lil' Schmoo wouldn't stay still long enough for me to get a half decent picture on my crappy cell phone camera, so no pics of him with pumpkins or trains. boo.

On Sunday, I had a special date with SchmoopyBoy. Just the two of us. We went to see the Batman Live show. In case I haven't mentioned previously, SchmoopyBoy is somewhat Batman obsessed these days. He has discovered the magical world of super heros and villains. Batman is his favorite. I thought the show was great! SchmoopyBoy thought it was a little too long and complained that the villains were "boring." (WTF?!?!?!?) At two hours including an intermission, it probably was a bit long for a 4 year old. And perhaps watching the villains stand around and plot against Batman wasn't the most exciting part of the show. But... Acrobats! The Batmobile! Batman and Robin! Cool stuff!!

I was chatting with him at bedtime, and I realized that the main thing that was so special for him was that I spent the day with him. I don't need to spend a lot of money on tickets to shows to make him happy. The fact that he got to spend time alone with me and get my full attention made him feel special. The fact that he got to dress up like his favorite superhero, and see him in action was just icing on the cake.

On Monday SchmoopyBoy got sick.  It's just a cold, but still no fun. Hopefully no one else will catch it this time around.

Hope everyone had a good weekend!

SchmoopyBoy first told me about the Scorpion Longtongue a few days ago. He had made a sculpture of it at preschool. Since I was unfamiliar with such a beast, I asked him about it. Here are a few details:

I finally got to see a model Scorpion Longtongue today when I picked SchmoopyBoy up from preschool. Exhibit: 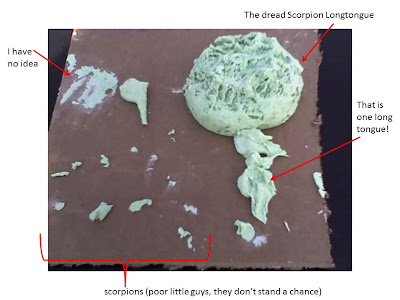 You might be wondering, how does he know about scorpions? Well, we've found two of the little suckers in our yard over the past month or so. (Eeek!!! Those things freak me out more than the black widow spiders that like to take up residence in these parts!) Pest control has been called. Unfortunately, their arsenal does not include any natural predators such as the dread Scorpion Longtongue.
Posted by Shana at 4:30 PM No comments:

Shana
You see most people have this filter between their brain and their mouth, but I lack such a filter. The results are sometimes comical, sometimes disastrous. You be the judge.